Just added to your cart

We love this tree so much. Very natural and realistic looking. The quality is fantastic. So easy to put together. 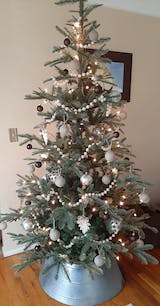 R
4 Pack Santa Glass Ornament R.F.
Thank you it was so nices of you to give them to us Love my new tree! Can't wait to decorate it This is literally the BEST thing I’ve ever bought in my entire life! I am so in love that it’s ridiculous!!! 😍😍😍
I recommend it to EVERYONE!!! We’ve all ordered items that once we receive there’s this let down...this tree is exactly what I ordered, and maybe even more beautiful in person as you can see the attention to detail that went into it. I am sooo so happy with it. It’s going to make Christmas that much more special given everything leading up to this Christmas with COVID. I’ll be putting it up NOV 1!

Beautiful tree! Easy to assemble. Flocking is great. Love it!! I bought the King Flock in August and has only opened one box so far. I saw it on Pinterest and got obsessed with it. I can’t wait to put it up and decorate it next month. So I was on the fence between this tree and the king and queen. I went for this tree due to the price point and wanting a bigger tree. I also read many reviews and lots of people felt the prince tree was just as beautiful as the others. I can’t say anything as I don’t own the other trees to compare but I love this tree!! It’s as gorgeous as I expected it to be! Setup was pretty easy and you can really spend as much or as little time “fluffing” as you want. I spent about 2.5-3 hours total on mine out of the box. The tree looks full and seems like it will hold heavy ornaments without any issue! I may just keep an eye out for a sale to get another! Oh and fedex lost my first tree and King of Christmas shipped me another right away! 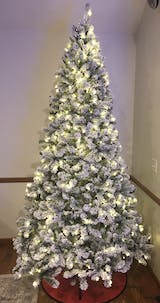 We absolutely love our Christmas tree! Very good quality and beautiful! It was shipped very quickly! 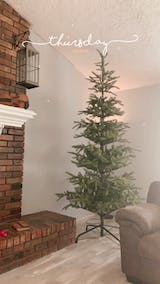 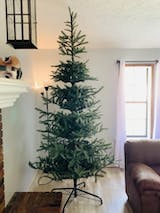 Great packaging. Haven’t fully opened yet as I’m waiting to decorate for holidays. Happy with the company so far! We are extremely excited to have received our Christmas tree. It got here at a perfect time and we can not wait to assemble and decorate. I didn’t know if I would like this Christmas tree when I ordered it but as I soon as put it up, I ended up loving it!!! It’s a great quality and easy to put together. I love how full the tree looks! When i bought the tree last year, it was advertised as light blue with pictures that portrayed a lighter blue tree. The pictures now portray a darker color; however, be mindful that the tree will be a few shades darker given that it was photographed under bright settings. At first, I was disappointed because I thought it was light blue. I decided to keep the tree given that it was closer to Christmas. after i added another set of lights (tree is prelit) and white decorations, it became brighter and more beutiful and i was completely satisfied! I also like that the lights have three different brightness settings. It was easy assemble and take down. Also make sure you have a vacuum handy for the flock that comes off while setting the tree up. I have received many compliments on the tree. 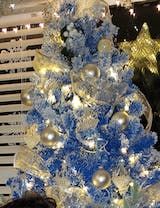 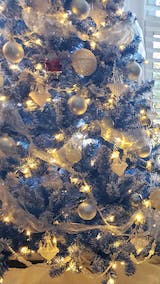 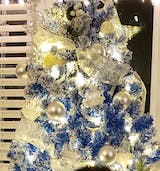 It looks so pretty, looking close to a natural one. It is full, i love the shape. It looks full and I also love the different light modes. bonus that it came with gloves so i can fluff easily. Exceeded every expectation. Shipping was fast and packaged perfectly! This tree is stunning! I looked at tons of trees last year and this was just as great quality as the "high end" ones that were crazy prices. Lots almost no flocking on setup too so no worries about it not being as beautiful next year! Really is just a gorgeous full tree! I have t opened the box yet as it is still fall. But I am sure it will be beautiful. I have heard so many good reviews.

It is nice and full. Love everything about it I'm soo pleased with the look of this tree. Very realistic and gorgeous

These ornaments are very nice and look like good quality. This is my first King of Christmas tree and it will definitely not be my last! It is absolutely gorgeous and I cannot wait to decorate it! LOVE THE TREE IS GORGEOUS AND BIGGER THAN I EXPECTED. WILL DEFINATELY BUY FROM YOU AGAIN.

Beautiful Tree! Can’t wait to decorate it for the holidays!

We love our new tree and we can't help to smile when we share it with our friends and family. I could have set up the entire tree by myself, but it much more fun when you get your family to help. Surprising, the flock did not flake easily and the quality of the tree is reflected in the price. We do get hesitant when someone ask how much we paid because it's high compared to the market. One caveat we have is the lights a "Warm White". Our house have all Daylight White lighting, which throws of the ambiance from the tree. For that reason, we don't have it lit often. I could return the tree to get an unlit tree but it's already up.